What If Nobody Knows What’s Wrong?

Taylor became ill at the end of her sophomore year in high school when she was fifteen and a half years old. Over the course of the next year she would suffer from intense fevers, rashes all over her body and debilitating pain in her head, joints and neck.

In May 2005 Taylor was hospitalized while countless doctors and specialists attempted to diagnose her condition. Unfortunately, no one could give her an answer as to what was wrong with her. She was treated for a variety of conditions but nothing seemed to provide any relief. Taylor limped through the next year seeing specialist after specialist, making emergency room visits and missing school. She had to quit all of her activities and things she loved the most… dance, horseback riding and running.

By the following spring Taylor was so weak and wracked with fever and pain that she was hospitalized once again. For over a month a team of neurologists experimented, drugged and tested her for everything imaginable but were still unable to determine the cause of her suffering. In June 2006 Taylor was given a spinal tap which indicated a serious, deep tissue infection. Based on all of their clinical findings, doctors diagnosed Taylor with Lyme disease. Left untreated, Lyme disease can progress to more serious symptoms involving the heart and central nervous system which can be debilitating, difficult to treat and even fatal.

Lyme disease is the most common tick-borne disease in the Northern Hemisphere and is transmitted to humans by the bite of infected ticks. The disease is named after the town of Lyme, Connecticut, where a number of cases were first identified. It has long been speculated that Lyme disease was created and accidentally spread from a US biological warfare laboratory at Plum Island, just off the coast of Connecticut, by Nazi scientists recruited by the US for post-war purposes. These scientists had specialized in using ticks and mosquitoes to spread diseases in Nazi Germany during World War II.

For the next two years, Taylor underwent every imaginable Lyme disease treatment available. Nothing helped. By the end of 2008 Taylor was incredibly weak and had virtually no energy to do anything. She could not work and was forced to drop out of college. It was during this time Taylor’s family discovered Hyperbaric Oxygen Therapy (HBOT). This treatment was instrumental in turning her health and life around.

After much research Taylor’s family contacted Sara’s Garden in Wauseon, Ohio regarding possible treatment options. While receiving HBOT at Sara’s Garden, Taylor finally turned a corner in her recovery. The pain that she had lived with for so long was was diminishing with each treatment and her energy had returned. She was now able to complete college, started a job at a hospital as a phlebotomist, got married and began a whole new life.

In January 2012, Taylor and her husband became concerned when she skipped a menstrual cycle and started hot flashing severely. Five different doctors diagnosed Taylor with premature ovarian failure and told her she would never be able to get pregnant and have children without an egg donor. She was devastated. Her dreams of starting her own family were now suddenly taken away.

While waiting to see a reproductive endocrinologist Taylor again contacted Sara’s Garden. Given Taylor’s medical history of Lyme disease it was suggested that HBOT could assist in eradicating any remaining active Lyme bacteria present and that the treatments could also help rejuvenate hormone levels and functionality. Taylor again began receiving Hyperbaric Oxygen Therapy. Soon after, Taylor went to her appointment with the reproductive specialist. He couldn’t explain it, but Taylor’s uterus and ovaries were now very healthy and she was deemed fertile. Several months later Taylor was overjoyed to learn that she was now pregnant and she had not needed any drugs or medical assistance in order to conceive!

Thanks to Hyperbaric Oxygen Therapy at Sara’s Garden, Taylor’s life has been changed forever. Her health, her life and her dreams of starting a family have been restored. No matter what you’ve been told, there is hope… for this and many other conditions. HBOT is treatment without drugs… without surgery… without pain. 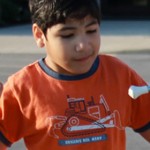